We are thrilled to announce that SEGRA 2017 will be held in the Upper Spencer Gulf, South Australia from 24 -27 October. 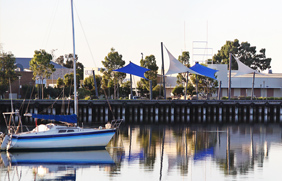 Port Augusta is situated on the quiet waterways at the head of the Spencer Gulf, in close proximity to the spectacular Flinders Ranges. Off to the west and south-west lie a range of hills which once marked the territory of the Nukunu Aboriginal tribe, and to the north-west are two remarkable flat-topped mounts, peacefully lying underneath the sky's vast blue canopy.
http://www.portaugusta.sa.gov.au/

Whyalla is one of the largest regional centres in South Australia and is located on the western shores of the Spencer Gulf. Originally founded in 1901 as the town of Hummock Hill, Whyalla has a rich historical history, especially in the Australian steel industry.
https://www.whyalla.sa.gov.au/

Port Pirie is nestled in the Southern Flinders Ranges, part of the amazing National Landscape, as well as being situated on the Spencer Gulf. It plays an important role as a regional service centre, with many of the surrounding smaller towns relying on Port Pirie for education, healthcare, retail and employment.
http://www.pirie.sa.gov.au/

The venue for SEGRA 2017 will be the Central Oval Function Centre, Port Augusta.

The Central Oval complex was completed in December, 2014 and has been embraced by the community. The facility boasts meeting rooms, change rooms, and upstairs viewing platform and function spaces. Central Oval has quickly become a central meeting place for both the Port Augusta community and for visitors from the region, and is a state-of-the-art facility that will serve the community well for generations to come.